Housing Society Kicks Off "Bounce Back Together" Shopping Promotion Campaign

The Hong Kong Housing Society (HKHS) is set to kick off the "Bounce Back Together" Shopping Promotion Campaign on 1 October 2020, in which residents living in its 20 rental estates and elderly housing projects, as well as staff, will each be given one set of vouchers worth $100, to be spent at shops run by commercial tenants under HKHS.

HKHS Corporate Communications Director Pamela Leung said that about 90,000 sets of cash coupons will be distributed for spending at around 300 participating merchants, of which nearly a hundred will offer exclusive discounts or freebies for coupon users.  Details of the Campaign are available on HKHS website.

HKHS made announcements earlier that the rent concession for eligible commercial tenants would be further extended starting from October and that rents for domestic tenants would be waived for the month of October this year.  The "Bounce Back Together" Campaign aims to further support the community by encouraging spending among the residents and boosting sales for businesses. 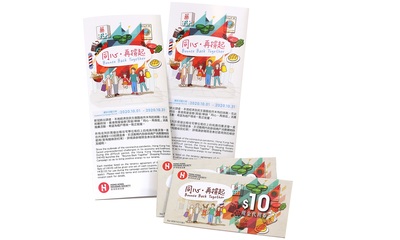 HKHS launches the "Bounce Back Together" Shopping Promotion Campaign to benefit both its domestic and commercial tenants. Residents collect the cash coupons at Estate Office and express their excitement about the Campaign.